I got some great Armless Theo fanart by Galago. See? It's spiffy.

C.J. Burgundy of Burgundy Comics created this nude picture of Clydia for Naked November. If you would like to see more of her drawings of de-clothed webcomic characters for Naked November, you can do so here: NAKED November thread.

from Kristina Foster of Antics

from Nathan Birch of Zoology

An awesome Head Doctor doll made by Nanda

From RA. Thanks RA! 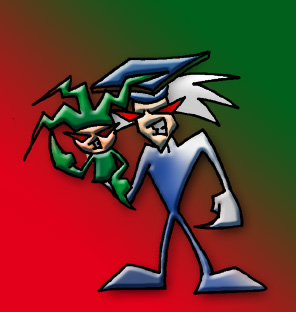 Steve Stacy made this new and extreme version of the Head Doctor and Dr. Therapy based on the Loonatics characters.

There's a bit of madness going on in the Keenspace Forums, but I got some great fan art from it. I got An interpritation of a stinkywigfiddle in crayon from Maria and Machelle (both of them, I guess). And a lego one from D.M. Jeftinija. And one made from a paper cutout from Phalanx. And an origami stinkywigfiddle from McDuffies

By VileTerror. It's a group picture of some Keenspace comic characters, my Head Doctor included. Only, they're all missing pants and the puppet is stuck in a rather awkward place... The other characters are from Pimpette and Associates, Ugly girl, and World Warp.

I did something for Cat Legend.

Corey McDaniel, creator of Pet 'N Zoo gave me this fan art for The Order Of Things Series.